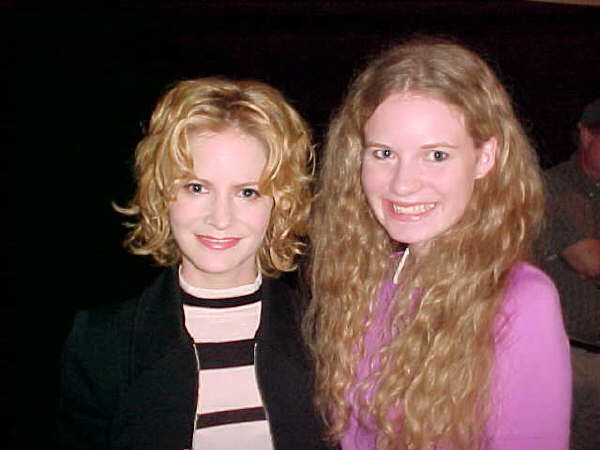 in the multiple orgasm of good luck, sometimes an extra squirt shoots out and LA is such a soft town that on the final night of the jennifer jason leigh retrospective they could hardly fill half the theatre. true the Lakers were battling away with the most exciting foe in the nba in Game 3 of the finals, but there has to be a couple hundred people in the entertainment capital who would enjoy a double feature of Georgia and Miami Blues - especially when the star, ms. jjl, would be there to field questions during innermission.

but alas, me and my girl were pretty much the only freaks willing to pry themselves away from the nba finals and look, we were rewarded with the chance to to take a much better picture of the ladies.

but tonight is Game 4 and jjl is probably in another town and my teen idol is back in sin city and i am back alone in my hollywood bachelor pad and she said that she cried all the way back and the stewardesses got her kleenex and whats a poor boy supposed to do about that?

not much you can do.

they say libras need to be adored and i do feel a bunch better after nearly two weeks of that sorta treatment. i now know what my old girlfriends felt like after a night of nonstop tangling. i know what it's like being the one who feels semi-claustraphobic from the endless volleys of kisses, soft words and hugs. i know what it's like to be touched all day and all night, and not be the one instigating the heavy petting.

only in america would someone be dealt a hand full of aces and look around for the candid camera or try to sniff the set-up. this girl said that everything i did and was about was perfect and fuck, thats what ive been trying to convince myself of for years, would i prefer that the only other person who buys that load be 300 pounds and manlier? does it suck that shes still a teen and likes to make out more than fight? exactly which one of us should have been crying all the way home?

tonight i predict that the seventy-sixers beat the lakers.

allen iverson is a winner and he knows that if he has to score 76 points to beat the lakers that he's going to do just that. his boys are hoodlums but theyre telling him the truth which is "Tyrone Lue is not going to shut down the MVP of the league."